What Are Some Common Fire Hazards in the Bedroom Area? 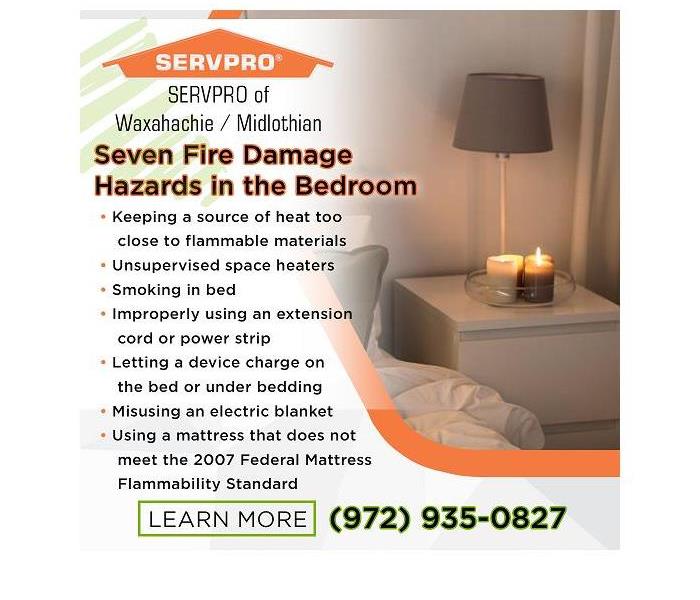 Blog Summary: SERVPRO of Waxahachie/Midlothian urges homeowners to be aware of seven fire damage hazards in the bedroom.

The SERVPRO of Waxahachie/Midlothian fire damage restoration team realizes that most people do not associate the bedroom with a property damage disaster. The bathroom floods from a sewage overflow or a bathtub leak. The washing machine supply line bursts, engulfing the laundry room in a watery mess. A grease fire seriously damages the kitchen. A tangled web of equipment cords and charging stations plugged into a frayed extension cord turns the home office into a charred shell. Sparks from a power tool ignite oily rags in the garage workshop, heavily damaging a vehicle and nearly burning down the home before the flames can be extinguished.

However, the bedroom is not without its own set of fire hazards. An article in Safety+Health magazine highlights the danger of a bedroom fire, writing, “About half of all fire deaths in homes occurred in the early morning hours, and one-third of victims were asleep, according to a recent U.S. Fire Administration report on 2011-2013 residential fire fatalities...Half of all fire deaths occurred in bedrooms, and 52 percent occurred from 11 p.m. to 7 a.m.”

In light of these compelling statistics, the fire damage restoration company urges homeowners to be aware of fire hazards in the bedroom.

Being aware of these fire hazards in the bedroom and taking action to prevent them or remedy the situation when they are discovered can save lives and property.

#1: Keeping a source of heat too close to flammable materials

Keep heat sources such as space heaters, electronics, and candles at least three feet away from combustible items such as clothing, stacks of books or magazines, curtains, and bedding.

Smoking in bed can be lethal. The number one cause of deaths in housefires is smoking in bed, and one-third of these fatalities are children. By simply taking the activity of smoking outside, seventy-five percent of the nearly 90,000 structure fires caused by smoking could be prevented. Do not smoke in bed or in any place where falling asleep while smoking is possible, such as rocked back in the recliner or lounging on the couch.

With more people working from home, a corner of the bedroom often becomes a new home for the office cubicle, placing greater demand on the electrical outlets in the room. Most electrical fires start in the bedroom, so it is important to pay attention to the power drain and the power cords in that room. Take steps to ensure that electrical cords cannot become tangled. Check for tangled cords and allow space around them for the heat to dissipate. Replace frayed cords. Occasionally feel the cords to see if they are becoming warm. Warm or hot extension cords are overtaxed and are a fire hazard. Avoid using an extension cord with equipment, devices, or appliances that require a large amount of electricity to operate. Examples include curlers, curling irons, hairdryers, air conditioners, heaters, or dehumidifiers. The cord can overheat, and arcing and sparks can occur where the two cords connect. Never run electrical cords under the bed, carpet, or rugs. Avoid pinning extension cords between the wall and any furniture.

#5: Letting a device charge on the bed or under bedding

Charge devices such as phones, laptops, and tablets on a hard surface and never in the bed or on carpeting. A device in the process of being charged can generate a lot of heat. Sometimes malfunctions during the charging process can cause the charger or device to become very hot, melt, or catch fire.

Use electric blankets with caution, and make sure to turn them off before going to sleep.

#7: Using a mattress that does not meet the 2007 Federal Mattress Flammability Standard

The bedroom can be transformed into one of the safest rooms in the home by simply taking a few common sense corrective and preventive measures. In the case of a fire, smoke, or water damage disaster, reach out to SERVPRO of Waxahachie/Midlothian for assistance.

For more information about fire damage restoration in Midlothian, TX, contact SERVPRO of Waxahachie/Midlothian by phone at (972) 935-0827 or by email at acarey@SERVPRO10932.com.