How Straight-Line Winds Can Cause Devastating Storm Damage 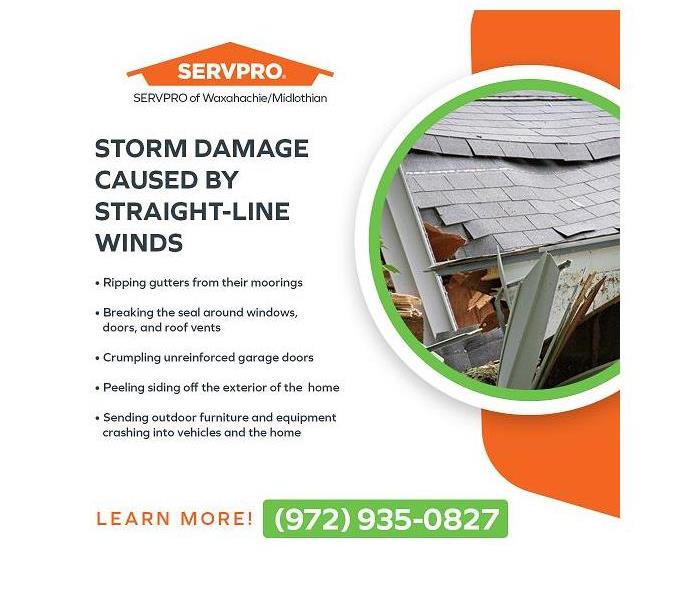 Blog Summary: SERVPRO of Waxahachie / Midlothian alerts homeowners to the dangers of straight-line winds and offers advice on how to recover from an encounter with these powerful weather events.

NOAA weather experts distinguish another type of straight-line winds: down-bursts. “Down-bursts are one example of damaging straight-line winds. A down-burst is a small area of rapidly descending rain and rain-cooled air beneath a thunderstorm. Wind speeds in some of the stronger down-bursts can reach 100 to 150 miles per hour which is similar to that of a strong tornado. The winds produced from a down-burst often travel in one direction, and the worst damage is usually on the forward side of the down-burst.”

A Closer Look at the Dynamics of Straight-Line Winds

Condensation in the form of precipitation causes cooler, dryer air to form inside a thunderstorm. As more moisture condenses, more cool air is produced. Straight-line winds develop when the cooler air is forced downward by powerful dynamics inside the storm as set off by the differences in the weight, temperature, and density of the warm air and the cooler, dryer air. When the cooler air collides with the round, it spreads out horizontally. These fast-moving straight-line wind gusts may reach speeds of over 100 mph. The downward movement of the cooler air is sometimes referred to as a downburst.

Why Straight-Line Winds Are Often Confused with a Tornado

Tornadic winds create havoc and destruction but are soon passed. Straight-line winds may not reach tornadic intensity but may last twenty minutes or more. Sustained winds of 58 mph to 165 mph can cause severe property damage.

Roof damage may include damaged or dislodged shingles. The strong, sustained wind can roll up shingles, underlayment, and sheathing like a bedroll, exposing the attic to severe water damage. Other property damage effects include:

A home may erupt leaks in the roof, around windows and doors, and in the garage. Ceilings may collapse. Walls and floors may buckle and warp. Excess water may flood the HVAC air ducts. The moisture and warm weather foster mold growth.

When straight-line winds damage a home, a quick response and a rapid cleanup and restoration are crucial to prevent advanced secondary damage such as mold infestation, warped and buckling walls and floors, and wood rot. The team at SERVPRO of Waxahachie / Midlothian is dedicated to helping customers whose homes have been damaged by severe weather and suffered a serious water intrusion. The SERVPRO professionals utilize the best and most efficient equipment to remove any bulk water, and commercial-grade dehumidifiers and rapid-spin fans reduce the humidity to acceptable levels. Once the water is removed and the structure is stabilized for safety purposes, the storm damage restoration process can proceed. The customer is provided with a detailed estimate documented with images and video, and SERVPRO can manage the insurance claims process from beginning to end.